Diego Simeone is looking to bring in a new striker this summer after Atlético Madrid struggled to find the back of the net regularly last season, manging only 51 goals in 38 league matches.

Last week, Marca reported Alexandre Lacazette is not the first choice target, but the option to take the Arsenal player in a swap deal ‘motivates’ the La Liga side.

Sport on Monday once again reiterates the need to bring in a goalscorer in the ongoing window, and the Gunners forward gets a mention.

As per the report, Lacazette’s name appears on ‘top of the list’ at Wanda Metropolitano.

Atlético’s interest in the former Lyon star is also reported by Mundo Deportivo, and they state the Frenchman has been sounded out by Los Rojiblancos in recent days.

It’s claimed Arsenal are willing to sell the player and are looking for a new club for him in this window. 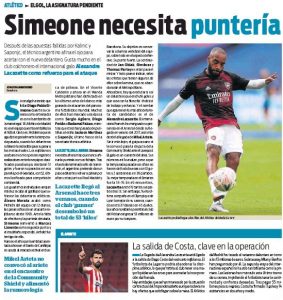 Both Sport and Mundo explain the attacker is an option for the Madrid club.

Mundo’s report further adds Atlético’s intention is to offer some of their players, such as Thomas Lemar, Ángel Correa or Vitoloto to Arsenal, in exchange for Lacazette.

However, they can only bring in a new striker only after they offload Diego Costa.