Manchester City’s Lukas Nmecha spent the 2020/21 season on loan at Anderlecht, where he finished the campaign with 21 goals and three assists across all competitions.

The team led by Vincent Kompany are convinced they want to retain him, but it won’t be easy.

His contract with the Premier League winners runs down in 2022 and with Pep Guardiola not counting on the striker, the Citizens are looking to sell him this summer.

Since then, Germany won the UEFA U21 European Championship after defeating Portugal and the City player scored the only goal in the final.

After Nmecha’s latest heroics, his valuation has now increased from €8m to €12m, and with the new price tag, Het Nieuwsblad state signing the Germany U21 international will be ‘unattainable’ for the Belgian side.

Anderlecht are warned they must not be ‘under an illusion’ that City will do them any favours to them due to their connection with Kompany.

The Manchester based club will sell their player, but not at a price that’s below his new market value. 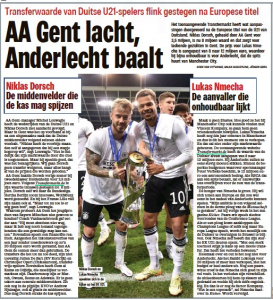 With their limited budget, the €12m fee becomes an ‘astronomical amount’ for Anderlecht, and even if the Jupiler Pro League side manage to pay that amount to sign Nmecha, they will not be left with funds to make other additions to the squad.

It’s not completely over for Anderlecht, however, and if they manage to sell Sambi Lokonga [linked to Arsenal] for €20m, they could then use part of the funds to retain the City striker.