Dimitri Foulquier joined Watford in 2017 and has spent the last two seasons on loan at RC Strasbourg and Getafe.

The La Liga side wanted to sign the right-back in the summer, but the Hornets didn’t want to send him out on loan ‘under any circumstance’ and were demanding no less than €2m.

He has been restricted to three appearances (one start) in the Premier League this season and the 26-year-old has emerged as a target for Nantes, according to L’Equipe.

It’s claimed the Ligue 1 side has ‘filtered only one name’ for the right-back position and that’s Foulquier. They also stated there is ‘nothing concrete’ to report.

Ouest-France talk about the French club’s interest in the fullback and they explain the Foulquier is ‘seriously approaching’ Nantes.

They further add Foulquier is ‘expected’ at Nantes and ‘should soon play under the colours of FC Nantes’. 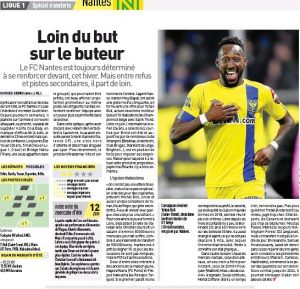 Due to the limited playing time at Watford, Foulquier would prefer to relaunch his career.

The report suggests a permanent switch to Nantes will help him achieve it because Dennis Appiah is the only recognised right-back following Fábio’s serious knee injury in October.