Home Europe Club chief waiting to see if Rangers ‘will cough up’ money to...
SHARE

Genk allowed Ianis Hagi to go out on loan to Rangers in January and as part of the deal, the Ibrox club have an option to sign the 21-year-old on a permanent transfer.

Over the past couple of weeks, Lazio have been credited with an interest in the Romania international and it was also reported the attacking midfielder has been offered to the Serie A side.

Due to the Coronavirus outbreak, football across Europe is suspended and it’s unclear when the sport will resume.

Het Belang van Limburg claims Genk sporting director Dimitri de Condé has taken advantage of the break and is not only screening potential targets, but also assessing what needs to be done on those players who are currently out on loan elsewhere.

Hagi is one of them and even though his contract with Genk is until 2024, De Condé is waiting to see whether Steven Gerrard’s side ‘will cough up’ €5m to exercise the option to make his temporary Rangers stay permanent.

If not, Condé and Genk may have to look at other alternatives. 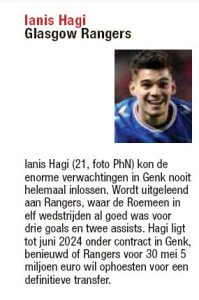 The report doesn’t mention if Rangers and/or Hagi are interested in extending the player’s stay at Ibrox beyond this season.

Earlier claims coming out of Italy suggested Hagi would prefer to compete in a league that’s more high profile than the Scottish Premiership.