Following the striker’s loan move at the start of the season, Spurs can now make it a permanent transfer, even though they’re unlikely to trigger the buying clause.

The agreement said the London side would need to pay €45m for the signing, with a discount of €3m for the fee spent on the loan. However, they are now ‘far’ from paying that much, as the deal is only happening if Benfica accept to let him go for less.

Correio da Manhã claims that the ‘responsible’ people at Tottenham now see Carlos Vinícius as the ‘ideal partner’ for Harry Kane in their attack. 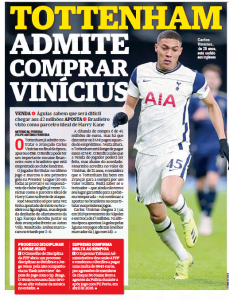 According to Correio da Manhã, José Mourinho reckons the club are ‘doing well’ by going for the purchase for a ‘realistic amount’.

Since joining Spurs at the start of the season, Carlos Vinícius has 10 goals and three assists in 21 appearances. That’s still far from the 24 goals he had for Benfica the year before, but perhaps the Special One now believes in the Brazilian’s potential.

Southampton and Watford ‘positioned to recruit’ player – Must battle with...