Of all his loans since he joined Chelsea, Tiemoué Bakayoko’s most successful was at Milan under Gennaro Gattuso.

There was hope he would be able to rekindle that form last season when he reunited with the Italian manager at Napoli, but it wasn’t to be, as the Naples side decided to return him to Stamford Bridge without attempting to sign him permanently.

This has left the Blues with a bit of a headache, as the defensive midfielder doesn’t appear to be in Thomas Tuchel’s plans, meaning a new club needs to found.

Thankfully for the Frenchman, Milan haven’t forgotten the good he did during his time at San Siro, and it appears they are keen on bringing him back.

Gazzetta dello Sport explain Bakayoko is ‘ready to move again, although this time the one-way ticket would make everyone happier’.

The player ‘wishes to return to the Rossoneri, and above all stay’ there permanently, which is a solution that would ‘obviously make Chelsea happy’ as the Premier League side ‘intend to cash in from a sale’.

With a contract at Stamford Bridge expiring in 2022, the situation doesn’t allow the Blues to ‘aim high’ with their demands, especially since they can’t simply loan him out without renewing him first. 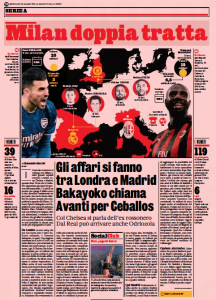 For Milan, a ‘loan with a redemption option is the formula’ they would be looking for, since ‘it offers the possibility of testing a potential purchase and not burdening the current budget’.

Whether Marina Granovskaia will agree to that and extend Bakayoko’s Chelsea contract remains to be seen, but it’s worth pointing out matters got a bit tense during the Fikayo Tomori negotiations towards the end.

Let’s hope that doesn’t affect these negotiations, whenever they decide to start.