After a few days of will they, won’t they, it appears that Napoli will in fact make a move for Sheffield United’s Sander Berge.

The defensive midfielder is likely to be one of the few exits from Bramall Lane this summer following the Blades’ relegation to the Championship, and while it was expected for a few Premier League sides to come knocking, it’s the Italians who are at the front of the queue.

Gazzetta dello Sport are reporting that Berge ‘is the player identified by Cristiano Giuntoli (Napoli’s director of football) to give balance and quality’ to their team, even if his price is higher than the alternatives in Toma Basic and Morten Thorsby.

Their new manager, Luciano Spalletti, has given his ‘approval’ to go ahead and attempt to secure Berge’s services, as he would like to have his full squad ready by July 15th, when they head off for their preseason retreat in Dimaro, Trentino.

However, ‘before accelerating the negotiations’, those in charge of transfers at Napoli ‘will want to have a more precise clinical picture of the player’s condition’. 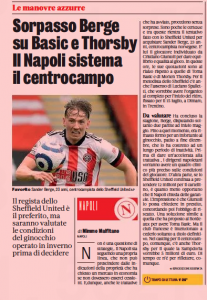 If Sheffield United ‘continue to demand €12m for the transfer, it’s at least advisable’ for the Serie A side to ‘ask for guarantees’.

In fact, ‘the impression is that Giuntoli can ask for him on loan, before agreeing on the obligation to buy’, which is similar to what he offered Bordeaux for the aforementioned Basic.

Certainly something for Sheffield United to mull over as they prepare their campaign to try and return to Premier League football at the first attempt.