Mildly amusing at first, Tiemoué Bakayoko’s struggles in Milan while on loan from Chelsea are starting to become rather painful to cover.

Much like a really old and sick pet, there’s a feeling it might be best to put him out of his misery rather than keep this going any longer, and Wednesday’s performance against Genoa was no different.

Once again, the Chelsea loanee was Milan’s ‘The Worst’ player on the pitch for Gazzetta dello Sport, who, much to their credit, try their best to find some positive in his performance, stating he ‘didn’t have a game to forget and lent a hand in midfield’.

However, it was his mistake that led to Genoa’s goal in the 2-1 win, as the defensive midfielder tried an incomprehensible back pass to one of his teammates at the back, which Christian Kouamé anticipated, and, with a lot of luck thanks to a huge looping deflection, managed to put in the back of the net. 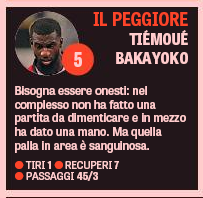 Corriere dello Sport, down their end, aren’t as nice as their pink papered counterparts, stating the Chelsea midfielder is ‘still committing too many errors’, while giving him the lowest grade out of everyone on his team (5/10).

Gazzetta also highlight his ‘technical imprecisions’, which all but encapsulate his time in Italy so far.