Earlier on Friday, we covered a report from Italy claiming that Chelsea and Manchester City were the two clubs to look out for in the race to sign Matthijs de Ligt.

However, Gazzetta dello Sport, who ran the article, explained Juventus would ask for the €120m release clause to be paid.

Well, Corriere dello Sport see it differently, in a way, pushing Chelsea and Manchester United as the two main competitors in the race for the centre-back.

De Ligt’s contract is up in 2024, and Juventus want to renew him, but the Dutchman, before signing, wanted to see that release clause dropped to more affordable figures, in the €80m range.

However, Corriere dello Sport go all out with their article, doubling down on the fact there will be ‘no renewal’ and ‘no revision of the clause’, going as far as saying the player ‘has asked for the sale’.

That’s where Chelsea and Manchester United come in, with it pointed out they are ‘ready to intervene’. 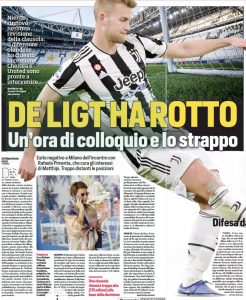 The arrival of Paul Pogba ‘was not enough to convince’ De Ligt of signing the new contract put in front of him, and he ‘decided to take a decisive step himself’.

Basically, he wants to be sold, and ‘all the big names in Europe are lined up for the Dutchman’.

This includes ‘in particular Chelsea, with the new owner intending to make fireworks, and Manchester United, at the push of the new manager, Erik ten Hag’, who was De Ligt’s mentor at Ajax.

Other clubs are mentioned, but it’s abundantly clear the Red Devils and the Blues are ‘in pole position’ to sign him.

Each also have their own advantages, because while Chelsea have Champions League football, Manchester United have Ten Hag.