Chelsea defender Emerson Palmieri is Inter Milan’s ‘chosen one’ to fill their left-back position next season, and the club already have an agreement with him.

That’s according to Corriere Dello Sport, who provide the latest update on Inter’s pursuit of the left-back this summer.

The Serie A side have long been linked with a move for the Chelsea man, with numerous reports over the last few months indicating Antonio Conte is a fan.

Corriere back up that assertion today, stating that he is the one the club have chosen to fill the left-back spot.

They already have an agreement in place with him, and a move is ‘well underway’ because Chelsea have put the player on the list of those they wish to sell this summer.

Thus, it is hard to imagine a ‘long pull’ between the two clubs; instead, it will be a matter of finding a price that suits both parties as there is a ‘certain distance’ between their respective valuations of the player. 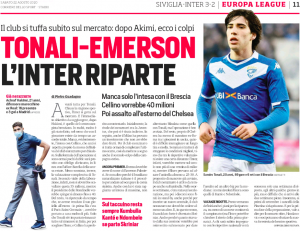 Inter would prefer to pay no more than €20m for him, but Chelsea want to raise that to at least €25m, preferably €30m.

That would suggest there is a deal to be done in the middle at €25m and negotiations are seemingly well underway to try and find an agreement.