This morning Mauricio Pochettino will be on cloud nine. Fernando Lllorente’s goal for Tottenham saw them safely through to the semi-finals of Europe’s elite competition, where they’ll be facing Ajax.

The Ajax midfielder was one of his team’s best performers, and a goalscorer, as they beat Juventus 2-1 in the Champions League this week.

Thursday’s edition of Marca takes a look at interest in signing Ajax’s stars and they even name Real Madrid as being keen on Van de Beek, but they’ll face competition.

Juventus and Bayern Munich have also been impressed, whilst Tottenham and Arsenal have the player’s name down ‘in capital letters’.

L’Equipe covered PSG interest in the January window, and explained there was also interest from Tottenham and Manchester United. 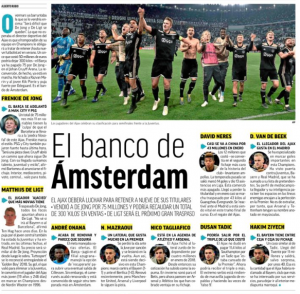 Spurs have much experience of dealing with Ajax over transfers, which will at least mean the communication avenues are open.

Back in the winter market, the French newspaper suggested Ajax would listen to offers of around €20m. That seemed overly optimistic on behalf of PSG then, and it seems a price way too low now.

Doubling it would be more realistic, and even then Ajax may think they can get more.

Dutch newspaper De Telegraaf have Van De Beek on their front page today, calling him ‘The Prince from the Backyard’. 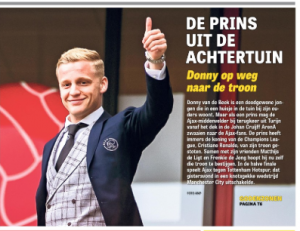 They go on to explain: ‘Donny van de Beek is an ordinary boy who lives with his parents in a house in the garden. But it’s as a prince that the Ajax midfielder can wave to the Ajax fans from the deck in the Johan Cruijff ArenA when they return from Turin.

‘After all, the prince has pushed the king of the Champions League, Cristiano Ronaldo, off his throne. Together with his friends Matthijs de Ligt and Frenkie de Jong, he now hopes to ascend that throne himself. In the semi-final Ajax plays against Tottenham Hotspur, which eliminated Manchester City in a crazy match last night.’