The pair are said to be wanted by most of the top clubs clubs around Europe and big money moves are expected in the summer transfer window.

All the attention going to De Jong and De Ligt has taken the light from other players, but Thursday’s edition of L’Equipe diverts it to Donny van de Beek.

PSG are said to be interested in the midfielder for a winter transfer, it’s thought the 21 year old has qualities similar to Adrien Rabiot, who is expected to leave the club either this month or in the summer. L’Equipe believe Ajax would listen to offers around €20m, which sounds optimistic.

Tottenham and Manchester United are also said to be in the picture, with the Premier League clubs ‘following’ the player. Spurs especially have experienced of dealing with Ajax in recent windows, with the purchase of Davinson Sanchez being the most recent. 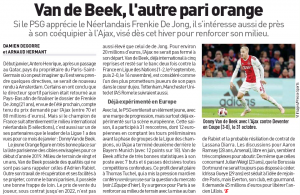 Manchester United sent Daley Blind back to Amsterdam in the summer, and have a good connection in Edwin van der Sar.

Should the €20m figure be correct, that’s certainly worth consideration for a January move.