This week, many reports from the Portuguese media have been talking about Benfica’s interest in signing Ruben Vinagre from Wolverhampton Wanderers.

The full-back is currently having a loan spell at Famalicão, and has apparently convinced the Eagles to have a go at signing him in the next transfer window.

The coach worked with Vinagre at Portugal’s youth ranks, and now approves the player’s potential move to Benfica.

“Replacing Grimaldo is a demanding challenge, as it would be just to represent Benfica. But I believe that he sees this challenge not as an obstacle, but as something desirable. Ruben Vinagre has the capacity to go far,” Hélio Sousa told Record.

The coach also praised the player’s decision to go out of Wolves on a loan to seek more playing time.

“He decided to take this step, as he needed to play regularly. Anyone who knows him sees that he’s happy, because of the way he expresses his abilities.” 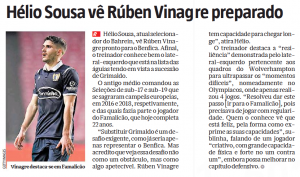 Ruben Vinagre joined Wolves on a loan move from Monaco in 2017, which was made permanent in 2018.

He still featured for the Molineux side until last summer, getting a total of 70 appearances for the club.

At the start of the season, he was sent to Olympiacos, where he failed to get enough playing time and only made four games.

Things now look a lot better at Famalicão, whom he joined in January and already has 13 matches played, and it now seems he could stay in Portugal for good, as long as Benfica find a deal with Wolves.