Defender Leo Ostigard has ‘reiterated’ to Brighton & Hove Albion that he wants a move to Napoli this summer amid efforts from Torino.

That’s according to Corriere Dello Sport, who say the defender is refusing to join anyone but Napoli this summer.

The Italian side are keen on the centre-back after his loan spell at Genoa last season but have so far been unable to strike a deal with Brighton, who are demanding more than Napoli are willing to pay.

In the interim, Torino have emerged as a option and are even willing to get closer to the Seagulls’ asking price.

Corriere back that up, stating that Torino have made ‘more convincing arguments’ to Brighton about a potential deal.

Ostigard, though, has ‘clearly explained’ to Brighton through his agent Jim Solbakken that he only wants to move to Naples.

He does not want to lose the chance of playing Champions League football next season, and his choice for the future is Napoli, with whom he already has a deal in place with. 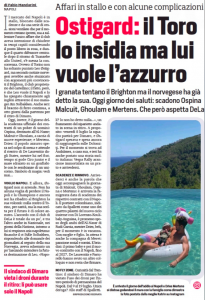 That agreement has been ‘total’ for a while, and now he simply wants Brighton to strike a deal with the Serie A side so the move can happen.

Indeed, he is hoping an agreement can be reached by July 8th, when Napoli are set to travel on their pre-season tour, something he ‘still hopes’ to be a part of.

For the moment, he is at home waiting for developments after making his stance to Graham Potter and Brighton as clear as possible.