Home Europe Midfielder ‘should’ move to Wolves in June – Molineux side have €50m...
SHARE

Since Matheus Nunes is still on holidays, there’s not a lot from the Portuguese media on him, as local reports have been more concerned about the players who started working with Sporting CP’s squad this week.

It turns out that with a little mention to the midfielder, newspaper Correio da Manhã today sounds sure that he’ll end up moving to Wolverhampton Wanderers this summer.

The outlet has a big piece about Lucas Robertone, an Almeria player who’s supposed to be the replacement for Nunes at Sporting.

After bringing all details on the Argentine player, Correio da Manhã points out that Nunes ‘should leave to Wolverhampton in June’.

The outlet writes that the Molineux side are ‘prepared’ to submit an offer worth €45m plus €5m in bonuses. 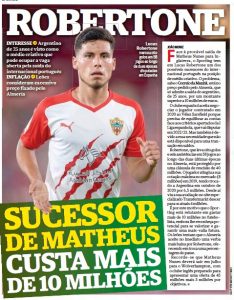 It’s true that in the past few weeks, several reports from the Portuguese media have been talking about a potential ‘resistance’ from Nunes in joining Wolves, since he’s also been linked to clubs of bigger aspirations and would like to leave Sporting to fight for titles.

However, it’s also true that none of those clubs seem that strong in the race, as Bruno Lage’s side are the only who get constantly named in the stories about the player.

So perhaps he’ll have no other option in this window than to join Wolves, unless he’d rather stay in Lisbon.