A few days ago, Newcastle United’s interest in Stevan Jovetic was reported in the Italian media.

Jovetic could be sold by Inter Milan to provide the club with funds to spend before the end of the transfer window, but the former Manchester City player wasn’t described as thrilled about a return to English football.

Despite that, Newcastle United were said to be so determined that a delegation was to be sent to Italy to try and build a deal, and then persuade Jovetic that Rafael Benitez is the manager for him.

That delegation may well run into a similar one from Brighton & Hove Albion, if Gazzetta dello Sport are correct.

This weekend the Italian newspaper report a ‘rich offer’ from Brighton to sign Jovetic. The financials of a potential deal aren’t mentioned, but Brighton will have to pay around €14m 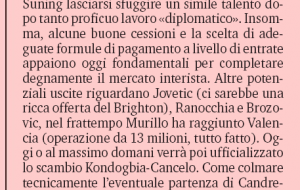 if figures from the Newcastle claims are correct.

Jovetic is a great footballer, but he’s struggled from consistency of play and club in recent seasons. It would be no surprise if he’s completely set against another move this summer, so Brighton and Newcastle, and perhaps Inter too, would have to be persuasive.

‘Not over’ – Player’s entourage try to lower price to seal...