Since the loss of Leonardo Bonucci to AC Milan in one of the more surprising transfers of the summer, Juventus have been looking for a new addition of the highest quality.

They’ve had problems finding what they require at the right price, and are becoming frustrated with Valencia’s high demands for Ezequiel Garay, given the player turns 31 years of age in October.

Gazzetta dello Sport say Van Dijk is an option for Juventus, but Southampton will of course be difficult to deal with.

The Italian newspaper don’t mention what Juventus would be prepared to pay, but if the Turin club went anywhere near the figures which have been suggested this summer for 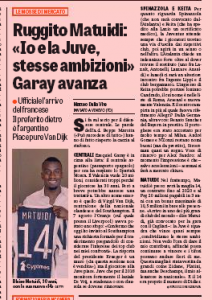 Van Dijk, then it could be a great opportunity for Southampton.

The player wouldn’t go to Liverpool, so Southampton wouldn’t lose too much face, and they also wouldn’t be left with the unhappy Dutchman for the rest of the season.

Juventus would be a wonderful opportunity for Van Dijk himself, getting to play for a club genuinely fighting for trophies every season.