It was claimed the Eagles would like the German player to compete with Odysseas Vlachodimos for the position in Lisbon, even though the €10m fee demanded by the Gunners would be an issue for them.

It turns out that newspaper Record also features a story on this chase, and according to their report, Leno is ‘out of reach’ for Benfica.

The demand made by Arsenal isn’t even mentioned in their story. They say the problem is actually the goalkeeper’s salary at the Gunners, which is said to be over €5m per season. 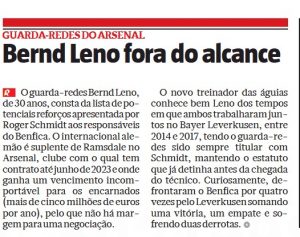 Leno’s arrival is said to be a request from Benfica’s new manager Roger Schmidt. He’d worked with the goalkeeper at Bayer Leverkusen, and according to Record, presented his name in a list of potential targets for the Eagles.

Now it seems that unless Arsenal let him go for little and he takes a huge pay cut, this transfer doesn’t have any chance of happening.