Benfica are interested in signing Arsenal goalkeeper Bernd Leno, according to claims from Portugal today.

Correio da Manhã writes the Eagles are currently evaluating the possibility of making a bid for the 30-year-old this summer.

The signing is said to be a wish of Benfica’s new manager Roger Schmidt. The German boss reportedly sees his compatriot as a potential number one goalkeeper at the club, and someone to fight for Odysseas Vlachodimos’ place in the squad.

Now as the Eagles try to make the transfer possible, they know how hard it is to take Leno from Arsenal. It’s said the Gunners won’t accept letting him for less than €10m, and that ‘complicates the deal’. 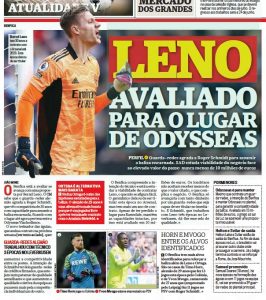 Correio points out Benfica would only spend that much on a goalkeeper who’d arrive to be a starter immediately, and Schmidt, who worked with him for three years at Bayer Leverkusen, believes he has the potential for it.

At Arsenal, Leno has only made eight appearances this season. He played the first three fixtures in the Premier League, but soon lost his place to Aaron Ramsdale.