Jota’s permanent move from Benfica to Celtic is today reported and detailed by Portuguese newspaper A Bola.

The outlet claims that following the player’s decision to accept the transfer, only ‘a huge turnaround’ would now stop this Celtic deal from happening this summer.

The report says Jota went to Ibiza for his holidays a couple of days ago, and left Glasgow ‘with the conviction’ that he will ‘continue to shine’ at Celtic next season.

It’s said he became convinced of staying after the experience he’s been living with the Hoops, and following a ‘very happy relationship’ with the club, he now decided to say yes to this ‘marriage’. 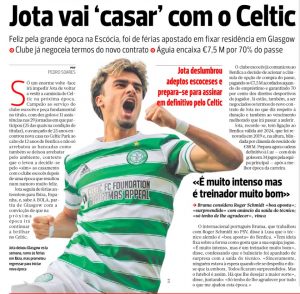 Regarding Celtic, A Bola writes that the club already told Benfica their intention of triggering the buying option, and are now set to pay €7.5m for the signing, with the Eagles keeping 30% of a future sale.

Jota’s new contract at Celtic is being negotiated.

In his year on loan with the Hoops, the winger has contributed 13 goals and 14 assists in 40 appearances. The report points out he’s pretty happy with the ‘great season’ he’s just had in Glasgow.