Earlier this month, Arsenal allowed Matteo Guendouzi to complete a temporary move to Marseille with an option to buy that is likely to be triggered.

The Ligue 1 side are also said to be interested in taking William Saliba and the deal to sign the Gunners defender was said to be on track.

Arsenal agreed a deal with Saint-Étienne for the 20-year-old’s transfer in 2019 and then loaned him back to his former club.

After struggling to find his way into Mikel Arteta’s plans in the first half of last season, the centre-back join OGC Nice on a loan deal in January. He could be set for another temporary spell, if a report from L’Equipe is to believed.

Jorge Sampaoli’s side are still hoping to bring in a new central defender in the coming days. 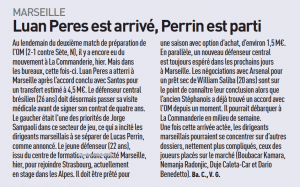 Saliba has been identified as a target and he has already ‘reached an
agreement’ with the French club.

Marseille and Arsenal are involved in negotiations for Saliba’s dry loan transfer and the newspaper states the deal ‘about to be concluded’.

The report even suggests the player ‘could land’ at the Marseille this mid-week.