Manchester United midfielder Marouane Fellaini is a free agent on Sunday and has a lot of admirers this summer.

As explained by Belgian newspaper Het Laatste Nieuws today, the 30-year-old knows he doesn’t have many fans and isn’t a crowd favourite at Old Trafford. He is horrified by the “perception” that a section of fans view him as an aggressive player and feels “misunderstood”.

However, Manchester United manager Jose Mourinho is a big fan of Fellaini and so was his predecessor, Louis van Gaal. Belgium coach Roberto Martinez is also an admirer of the former Everton man.

United have already made more than one offer to extend Fellaini’s contract, but so far the two parties have failed to reach an agreement. 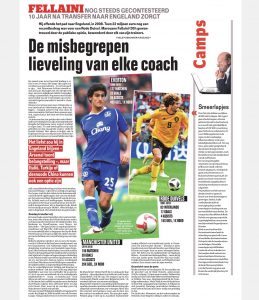 Fellaini believes a free transfer will help him demand better wages and also a signing on bonus. Having spent 10 years in England, he prefers to continue in the country, according to HLN.

Arsenal are one of the clubs in the race to sign the midfielder and the Gunners have shown interest in signing him this summer, something backed up by the Belgian newspaper today.

However, if Fellaini fails to join Arsenal or another Premier League side, he’ll look at the options of moving to Italy, Turkey or China to land the final big contract of his playing career.