‘Tick, tock’, the clock is ticking.

That’s how Corriere dello Sport look at the Granit Xhaka situation, as the Arsenal midfielder edges ever so slowly towards Rome.

Chosen by José Mourinho to be his midfield warrior going forward, the Switzerland international has been reported as keen to switch allegiances, and he could do so very quickly.

Corriere dello Sport explain ‘confirmation are rained on an imminent deal’, with the agreement expected to be reached at around €18m, ‘with the inclusion of easy bonuses that will serve to convince Arsenal’.

Tiago Pinto, the man in charge of negotiating the deal, ‘no longer doubts the outcome’ of the affair, firmly believing he’s got his man. 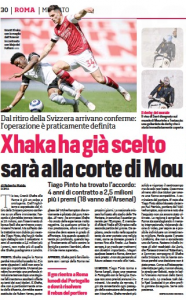 Corriere explain ‘Xhaka chooses Roma because Mourinho chose him’, and ‘money isn’t the most important thing’.

After a ‘failed season’, it’s explained that Arsenal are undergoing something of a ‘technical revolution’, with the Swiss midfielder, ‘not particularly loved by the fans’, one of the sacrificial lambs.

When the official announcement is expected isn’t said, but since Pinto is currently away on holiday until Monday, nothing should happen before then.