Over a month ago, AS explained Carlo Ancelotti sees signing Real Madrid’s James Rodríguez as a ‘key’ to ‘catapult’ Everton up the league table.

The Colombia international played under the guidance of the former Chelsea manager at the Santiago Bernabéu and Bayern Munich. The coach even wanted him at Napoli last summer.

Friday’s edition of Sport states Manchester United and Ancelotti’s Everton ‘could bet on’ the 28-year-old’s signing.

It’s claimed the player is one of the ‘great candidates’ to leave the La Liga side this summer, provided there’s an interesting offer.

Zinedine Zidane’s side are of the belief James’ sale can raise funds. However, the report explains only a few teams are willing to meet Real Madrid’s demand of €50-55m for a transfer.

Atlético Madrid are ‘determined’ to sign the South American, but Los Blancos don’t want to strengthen their local rivals. 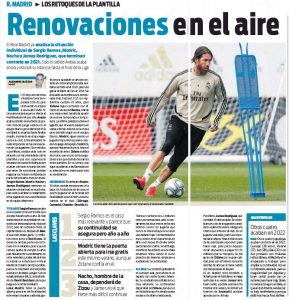 Therefore, there’s a possibility for James Rodríguez to end up in the Premier League this summer.

Although Sport have mentioned United, Win Sports in Colombia reported the playmaker is ‘not a priority’ for the Red Devils.

This could come as an advantage for Everton, if they remain keen on signing James.