For the past week or so, Liverpool and Barcelona have been named as suitors for Saúl Ñíguez.

The La Liga side want to carry out a swap deal with Atlético Madrid, involving the midfielder and Antoine Griezmann.

It was taken for granted the exchange deal will go through before Joshua Barnett, part of the agency that represents Saúl, admitted the swap is ‘not as close’ and his client has ‘many options to leave’.

AS also state the swap deal involving the 26-year-old and the Frenchman has not progressed well.

It’s said the Spain international could well end up at the Camp Nou, although his agent ‘has been contacting several clubs’, including Liverpool, to try and build a deal.

If Saúl fails to seal a move to Barcelona, England could be the possible destination as the Premier League ‘catches the attention’ of Diego Simeone’s man.

The La Liga winners, down at their end, can only sign a new striker if Saúl is sold in the summer. If they go ahead with an exchange deal with Barca, they will get Griezmann in exchange and if Saúl ends up in England, they will have to look elsewhere in the market. 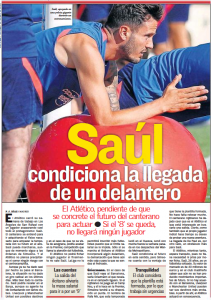 AS state Atlético ‘wait calmly’ as there is ‘no need or rush’ to move the player out of the club.

In the event Atlético fail to find an agreement with Barca for Saúl, the newspaper states Liverpool or Manchester United ‘may be his most likely destination’.