Manchester United want the operation to sign Raphaël Varane to be ‘carried out safely’.

That’s according to AS on Sunday, who say the defender’s sale is financially beneficial for Real Madrid, rather than allowing him to leave for nothing a year later.

The 28-year-old ‘expected a gesture’ from Carlo Ancelotti, that he would convince the club to offer an improved contract offer, but that hasn’t happened so far.

During the informal talks, the Red Devils requested permission from the Spanish giants to negotiate with the former Lens man, and the two sides fixed their positions.

Real Madrid hope to receive €70m, while Ole Gunnar Solskjaer’s side started with an offer of €40m plus €5m in bonuses. The Premier League club’s plan is to ‘present a first written offer in the next few days’.

Sources closed to the negotiations informed AS that ‘when Varane returns to training it will be the moment chosen by United to reactivate the operation’. A face-to-face chat with Ancelotti will help the player exert pressure to push for his transfer.

If Real Madrid open the exit door [without offering an improved deal], the Frenchman would prefer to leave as soon as possible. 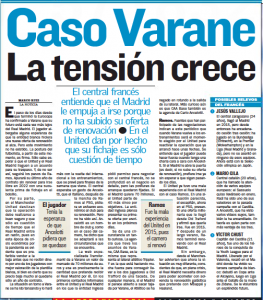 Manchester United were left disappointed with the Sergio Ramos case in 2015, yet are aware the situation is different this time around because the La Liga side need funds to make big signings.

The English club ‘take it for granted’ that Varane’s ‘signing is only a matter of time’.