Last Thursday, AS reported that Wolverhampton Wanderers have put Rafa Mir on the market as his contract at Molineux runs down in a year’s time.

It was also stated the striker’s participation at the Olympic Games with Spain provides him a ‘golden opportunity’ to revaluate himself after an impressive loan spell with SD Huesca.

Marca on Monday explain the 24-year-old has emerged as ‘plan B’ for Atlético Madrid this summer.

The La Liga winners and Barcelona are reportedly negotiating an exchange deal involving Saúl Ñíguez and Antoine Griezmann, and if the swap deal doesn’t go through, they will shift their focus on Mir.

Moussa Dembélé has returned to Lyon following his short loan spell and Los Rojiblancos need a player to replace the Frenchman next season. 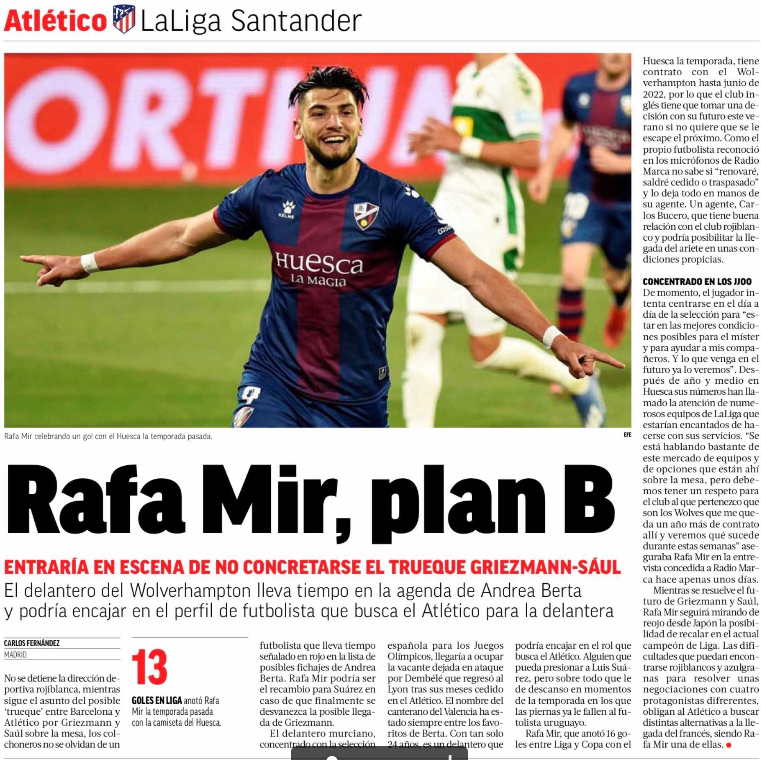 The Wolves player’s name has ‘always been among the favourites’ of the club’s sporting director, Andrea Berta.

Mir’s representative Carlos Bucero has good relationship with Diego Simeone’s side and the agent ‘could enable the arrival of the striker for favourable conditions’.

However, it must be remembered the possibility of the Madrid based club considering to sign Mir is likely to happen only if the return of Griezmann to Atlético ‘finally fades’.