At the end of last month, Luis de la Fuente announced his 22-man Spain squad for the Tokyo 2020 Olympic Games and Wolverhampton Wanderers’ Rafa Mir made it to that list.

AS on Thursday explain the squad selected by De La Fuente has the highest market value when compared to other nations.

The report also explains De La Fuente has taken advantage of ‘existing law in Spain’, where the Spanish clubs are ‘obliged’ to let their players go on national duty.

The only exceptions in the squad are Dani Almo and Mir, who are from RB Leipzig and Wolves respectively.

Mir has a year left on his contract with the Premier League side and the newspaper states Wolves have ‘put him on the market’. 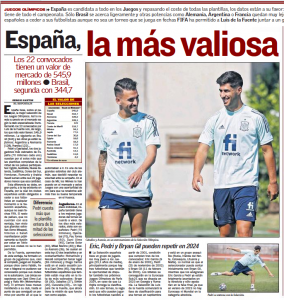 The Olympic Games will provide a ‘golden opportunity’ for the 24-year-old to ‘revaluate even more’, following his impressive loan spell with SD Huesca last season, where he managed 16 goals.

Several La Liga sides are on alert and with Wolves in favour of a sale, Mir could end up changing clubs this summer.