Yerry Mina moved to Everton from Barcelona on the deadline day and the Toffees paid €30.25m plus variables to bring the defender to Goodison Park.

The La Liga winners have an option to buy back the centre-back, whom they sold just eight months after signing him from Palmeiras in January. The 23-year-old struggled to impress at Camp Nou because of a “series of complicated situations”, but his performance for Colombia at the World Cup saw him attract interest.

He gave an interview to Catalan newspaper Mundo Deportivo during which he was asked if he joined the Merseyside club thinking that he could return to Barcelona one day. Mina said, “Yes, obviously, Barcelona is wonderful and I would have liked to be here always.

“You can only thank the colleagues, the technicians, the assistants, the treatment received here.”

Earlier report from Mundo Deportivo claimed Everton manager Marco Silva played a ‘key’ role in convincing the Colombian international to join the Toffees, amid interest from Manchester United and Lyon.

Despite expressing his desire to rejoin the Spanish champions, Mina insisted that his immediate focus will be on Everton and explained why he will “fight to death” for the ex-Watford boss.

“Now I’m going to try to focus on Everton, which is also a great club and I’m goin 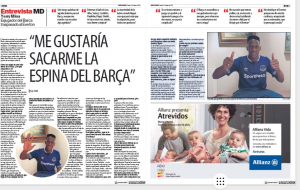 g to fight to the death for him [Silva] because he has shown me his trust,” he explained.