On August 10th, Mundo Deportivo reported that Barcelona have not closed the door for Ousmane Dembele’s sale.

The front page of the same publication now claims the Catalan club are aware that Paris Saint-Germain have tempted the 21-year-old to join them. They also know the Ligue 1 winners have ‘repeatedly’ called the forward’s agent to find out if their client would be interested rmnough to change clubs.

Ernesto Valverde’s side identified Adrien Rabiot as a transfer target and their general manager Pep Segura and technical secretary Eric Abidal travelled to France to meet the PSG president Nasser Al-Khelaifi to talk about the midfielder. During the discussion, the ex-Borussia Dortmund attacker’s name was brought up.

Dembele played under Thomas Tuchel at Signal Iduna Park and the German coach is aware of the World Cup winner’s qualities. The player also admires his former manager as the two share a good relationship. 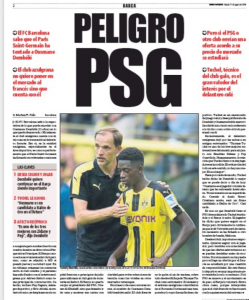 The Frenchman wants to continue at Camp Nou despite Malcom’s arrival, but Mundo claims the ex-Athletic Bilbao coach’s confidence will be decisive for the wideman.

Barcelona want to keep Dembele at the club and so far, haven’t received any proposal for their player. If PSG or any other club submits an ‘astronomical offer’, then  they will asses it.