When Barcelona signed Philippe Coutinho from Liverpool in January 2018, they clearly very much wanted the player.

They’d tried to get him the previous summer, with the Catalan media sending all kinds of snipes to the Reds and manager Jurgen Klopp after a deal was blocked.

Yet despite wanting Coutinho, and being prepared to pay €120m (plus a further €40m in potential bonuses), they really didn’t know what to do with him. There wasn’t any great planning for how he’d work in the side, or a managerial tactics system which was calling out for the Brazilian.

The best that can be described of the outlook was Coutinho being expected to ‘just do things Iniesta did’, and that was never likely.

Things quickly went wrong, and less than 18 months after his Liverpool departure, Coutinho ended up on loan at Bayern Munich. It hasn’t been a disaster in Germany, but the Bundesliga side don’t want to make the move permanent.

Therefore, Barca are looking for another option. 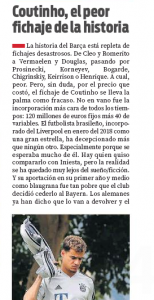 Sport are frustrated on behalf of their local club, and call Coutinho ‘the worst signing in history’. The player has ‘disappointed more than anyone else’ at Barcelona.

Coutinho was ‘unable to connect with Suarez and Messi’, seemingly on or off the pitch, and it’s likely that was the cause of his downfall.

Barca now just want to claw back as much as they can from an exit.