Thursday’s edition of Sport has a big feature on the future of Philippe Coutinho.

Barcelona and the player’s agents are looking for a new club for the Brazilian, and the likeliest destination is the Premier League. Several English clubs have been linked and it feels very much like Kia Joorabchian, who represents Coutinho, and the Catalan media are pushing the stories.

Deep down in the claims there’s something rather eyebrow raising about Chelsea’s Willian and Liverpool.

Chelsea are said to be looking at Coutinho themselves, potentially as a replacement for his compatriot, and it’s at that point Sport claim Willian is currently in negotiations over a transfer to Liverpool.

Those negotiations relate to ‘very favourable conditions’, suggesting the Chelsea player could get a big contract at Anfield given his free agent status. 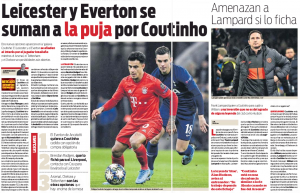 Sport don’t elaborate further, and it’s not something they make a huge deal about.

Both players are represented by the Sport Invest group, and have various agents working with them. Therefore it’s possible that when the Coutinho information was being pushed, this also slipped out about Willian and Liverpool.