It’s interesting how Rui Patrício is still much mentioned in Portuguese newspapers’ Sporting pages. We probably see the goalkeeper more times than players who are actually part of their squad.

Earlier this week, we covered news that the Wolverhampton player had been supporting the Lions’ public offer campaign.

Sporting were looking to make €30m with money raised by fans, who buy a ‘subscription’ and then get an an interest rate of 5.5%.

Patrício didn’t only help by promoting the campaign on his Instagram account. He’s actually bought some subscriptions, according to Record. The newspaper says the goalkeeper spent €100k. 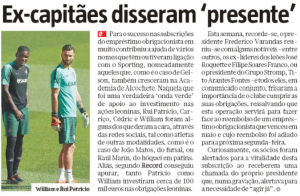 The interesting thing in this story is that the three of them rescinded their contracts with Sporting earlier this year due to the attacks at Alcochete. By doing this, they practically show it’s all fine between them and the club now. 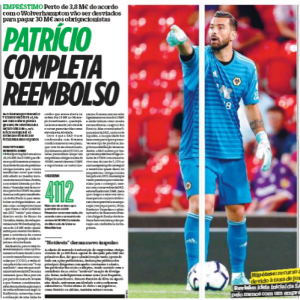 Patrício also gets some big attention from O Jogo.

That’s because although Sporting didn’t get the €30m from the public offer, they can still reach that amount due to Patrício’s sale.

They only managed to raise €26.2m, and now the other €3.8m to complete their goal will be taken from the fee paid by Wolverhampton for the goalkeeper.

That’s a slightly strange way for O Jogo to look at it.