The agent of Wolverhampton Wanderers’ Rúben Neves has put the star’s name on the table at Barcelona ‘for months now’, according to Sport.

Xavi Hernández’s side have some signings ‘already closed’ and others, that were discarded earlier, ‘can be reactivated in a brilliant way’ now. The midfielder falls into the latter category.

The newspaper claims the Wolves man ‘creates absolute consensus’ between the sporting and technical leaders.

His representative, Jorge Mendes, has the ‘task of reformulating everything’ because the La Liga side are ‘willing to study carefully’ signing the Portugal international. The super-agent is ‘working to make’ Neves’ signing for Barca ‘a reality in June’.

Mendes knows the 25-year-old will only arrive at the Camp Nou on favourable conditions. After initially discarding Bruno Lage’s star, the Catalan club have ‘reactivated’ this topic in recent days due to their latest results and the need to find a long-term successor for Sergio Busquets.

Sport explain the Premier League side are ‘very interested’ in ‘several Blaugrana players’ who are currently struggling for minutes, and who are open to making a move elsewhere. Nobody is actually named, though. 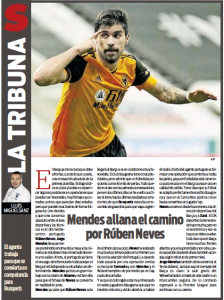 Neves is ‘crazy to join’ Barca, even if it’s on a loan deal. Mendes’ challenge is to formulate an operation that will satisfy all parties.

Sport further add the player has been ‘convincing Barça’s sports management and Xavi for months’. Their sporting leaders have given their approval for his arrival, but the economic aspect of the deal needs is the difficult part.

A loan clearly makes no sense for Wolves, unless it comes with a big compulsory purchase clause.