The number of reports about the La Liga wanting the 25-year-old have drastically reduced in recent weeks.

Sport mentions the Leeds United attacker in today’s edition of their newspaper. It’s claimed the La Liga side are hoping to sign a ‘minimum of seven players’ in the summer as Xavi Hernández wants two players in each position.

The report states ‘two players are expected to arrive’ in attack and one of them is Jesse Marsch’s man.

It’s claimed the Blaugrana have an agreement in place with the Brazil international, which has been stated before, and his transfer to the Camp Nou is thought to be ‘very close’. However, Barcelona must agree a deal with Leeds to carry out the operation.

Sport state that finding an agreement with the Premier League side ‘will be more difficult’. 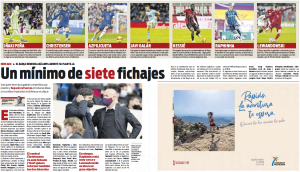 The newspaper insists ‘it will not be easy’ for Barcelona to ‘reach an agreement with Leeds’ to sign the South American.

There a chance the Catalan club are hoping Leeds falter in the final weeks of the season, because the deal would be easier to do if the club is relegated to the Championship.