Yann M’Vila has been linked with a move to the Premier League for much of his career.

When he was a highly rated youngster, it was Arsenal who got the most transfer rumours, and the Gunners links continued for years. He ended up in English football in 2015, on a loan move to Sunderland.

There were attempts to extend that stay, but they fell to pieces as the window closed.

Over the past year or so, West Ham’s name has popped up a few times, and that’s the case again today.

L’Equipe report M’Vila, now 28 years of age, could be leaving Saint-Etienne in the summer transfer window. He’s very close to the manager there, Jean-Louis Gasset, and it’s thought if there’s a change at the top, then the midfielder will look elsewhere. 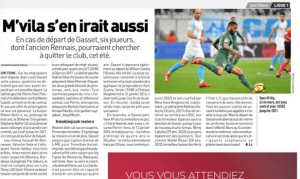 West Ham’s interest is ‘notable’, although they aren’t the only club following the player.

The Hammers are ‘courting’ him, and with Gasset’s future seriously under question, a transfer is on the cards.