With Antoine Griezmann leaving Atletico Madrid through the back door, with his destination still uncertain, some of his teammates have very much been sent out through the front door.

Diego Godin and Juanfran are both leaving at the end of their contracts with the Spanish club, and both being treated as departing legends.

Last week at training, fans adorned the perimeter of the pitch with huge posters of Juanfran, thanking the 34 year old for his service to the club.

Part of his legend is turning down offers from elsewhere, including Arsenal.

Around the January window there were rumours, albeit weak, that the Gunners had made a contract offer to the player. At that point it was thought he’d renew his deal with 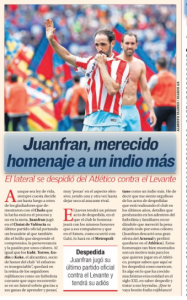 Monday’s edition of AS says Juanfran ignored everything else to stay, including a ‘great offer’ from Arsenal. They don’t make it clear when this was made.

What happens now isn’t entirely clear, but the Arsenal chance has probably gone.