Everton sent Yannick Bolasie on loan to Anderlecht for the second half of the season, having brought him back from a temporary spell at Crystal Palace.

An awful lot was expected of the 29 year old as soon as he arrived in Belgian football, and he wasn’t an instant success. That, even after a match or two, led to some doubts around the move and pressure being put on the Everton owned player.

Bolasie quickly showed some good form and it was all forgotten, but he wasn’t able to help Anderlecht have a positive end to the season.

The Belgian club are changing manager, with Vincent Kompany coming in to take charge, as well as still having a playing role.

Bolasie’s future could be at Anderlecht, if money issues, and Kompany’s desire, fall his way.

Quoted by HLN about his future, the attacker explained: “I have a good time at Anderlecht. I like being here. The club take great care of me, and my children are going to school here too. I am certainly not averse to an extended stay, although I realise that the financial situation may be a stumbling block.” 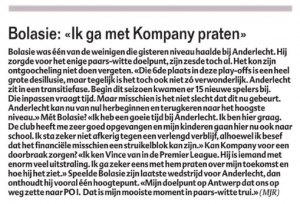 Everton have the player on a contract until June 2021, and it’s quite possible that Anderlecht could ask for another loan move. The Toffees would surely prefer a permanent transfer.

Bolasie plans to speak to Kompany to find out the new plans at Anderlecht.