Manchester City are one of a number of clubs keen on young Swedish talent Benjamin Nygren, report HLN on Monday.

The 17 year old currently plays for IFK Goteborg and is also attracting the interest of Ajax, Bayern Munich, PSG, Inter Milan and Genk.

Genk are looking at the youngster as a potential replacement for Leandro Trossard, who has been linked with several clubs including Arsenal.

Knowing the ‘immense’ interest in the player, the Belgian side are trying to get a deal done ‘in the coming days’, hopefully to get there before those giant clubs of Europe beat them to it.

Poya Asbaghi, Nygren’s manager, ​​recently said: “The expectations for Nygren are higher than for Zlatan Ibrahimovic at the same age.”

That’s some claim, and it’s believed the player would cost Genk €3.7m. A big fee for them, but pennies for a club like Manchester City. 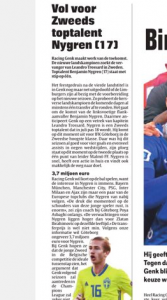 There’s not a great deal said about the interest from Pep Guardiola’s side, and they’d surely have to build a deal which saw Nygren move out on loan first.

Even if that could be arranged, they’d clearly have to hurry.

In April, the young footballer was asked about interest from Manchester United, who were thought to be scouting him, and said: “If I’m going to be completely honest, I don’t really look at it. I get to hear it more from people who interview me. It’s clear that it’s fun, but I cannot focus on who is watching me, otherwise I focus on the wrong stuff. The match is played on the pitch, not in the stands.”

Rangers v Standard Liège – Boost for Steven Gerrard’s side as...