Fanatik have claimed West Ham United boss Slaven Bilic is interested in his former player Oguzhan Ozyakup. The Croatian manager worked with Ozyakup at Besiktas, during his two year spell with the Turkish giants.

The 24 year old recently confirmed his desire to continue his career in a major European league, and the Besiktas captain has yet to sign a new contract with the club.

It’s been reported Besiktas will demand around €15m, which would be a healthy profit for Kara Kartal, after purchasing Ozyakup from Arsenal for just €600K.

The Hammers last season sent scouts to watch the Turkey international against Anderlecht in the Europa League, and since Bilic’s arrival at the club in 2015 the player has been linked with West Ham more than once. 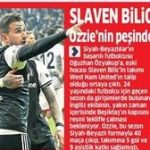 Fanatik report Ozyakup is very keen to join West Ham, but it’ll be difficult for the English club to convince Besiktas president Fikret Orman to sell.

Ozyakup having just 12 months left on his contract could, however, put Besiktas under some pressure.