West Ham United were keen on signing Juniro Firpo in January, but a deal never took shape and the left-back is still at Barcelona.

The Hammers continued to be named as a suitor, and on May 20th, Mundo Deportivo explained they even ‘probed him’ for this summer.

Operating as a left-back, the 24-year-old was restricted to only 18 appearances across all competitions as he mainly played as a backup for Jordi Alba.

Sport on Wednesday explain the La Liga side must offload some players before the end of this month and despite the current market situation, they remain ‘confident’ of closing some exit operations in the coming weeks.

At the Camp Nou, there is serious hope of being able to sell the former Real Betis man to a Premier League club.

West Ham have an interest, and they have been holding talks with the Catalan club for days, to ‘finalise an agreement’. The position of two parties ‘would already be quite close’. 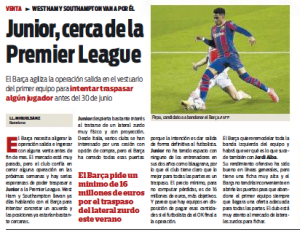 Barcelona will need a minimum fee of €16m for the player, in order to avoid losses, and that’s the price they have now set to sanction Junior’s sale. Sport are of the belief there are clubs willing to meet this figure, if the left-back gives his approval for a summer move.