West Ham and Southampton are shopping again in Ligue 1, which will be no surprise to supporters of the two clubs. Southampton have had a strong scouting presence in France for some time, and when they lost their France eyes to Tottenham, leaving shortly after Mauricio Pochettino, the club were sure to go back in strongly.

Slaven Bilic’s side have worked a lot with agents in French football, through recommendations of players, and that’ll continue in the upcoming transfer window and future ones.

Both clubs are credited with interest in Martin Braithwaite by L’Equipe on Friday. The 25 year old Dane has a contract with Toulouse until June 2019, and this summer looks prime for a sale, but his current club won’t be rolled over.

Both Southampton and West Ham are said to have ‘expressed their interest’ in the player, and it’s believe a Premier League move would be the likeliest, because of the finances available.

Braithwaite is a flexible forward. preferring to play in a central position, but who can also operate out wide. With 11 goals and 3 assists this season, Braithwaite is disappointed but feels his possession change had a big impact. 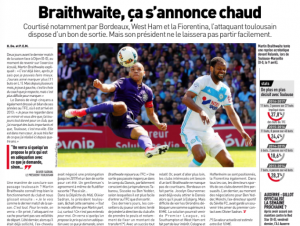 “I would have liked to score more,” the Toulouse forward is quoted as saying by L’Equipe. “But for several months, I play on the left, it’s a choice of the coach that I respect, but it’s harder to score.”

Toulouse wouldn’t make a deal easy, and Braithwaite’s agents are currently trying to get a firm price from them so they can build a transfer with interested clubs.

L’Equipe estimate that at €8-10m, which would be no problem for either West Ham or Southampton.