With Lukasz Fabianski still contracted at the club, West Ham aren’t in desperate need of a goalkeeper, yet they’ve already signed two (David Martin and Roberto) and are being linked with a number of others.

Earlier on Friday, we covered a rather outlandish rumour the Hammers could be ready to go after Barcelona’s Jasper Cillessen, who would cost somewhere around €20m.

It didn’t make much sense, and nor does the latest from Il Messaggero, who claim West Ham, Tottenham and Arsenal are all interested in Lazio’s Thomas Strakosha.

The Albania international was already linked to the Gunners and Spurs a few days ago by Gazzetta dello Sport, but the London Stadium residents’ inclusion here is new. 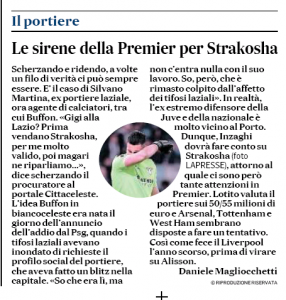 However, the fact the Serie A side are asking for €50-55m for Strakosha makes any move a bit complicated, and it’s worth pointing out that Gazzetta felt €25m would be enough in their report earlier in the week.

Il Messaggero state all three of the mentioned clubs ‘seem ready to make an attempt’, but considering all of their goalkeeping situations, it makes little sense.

Perhaps West Ham are trying to get ahead of the curve, as Fabianski is 34 years old, but he still has two seasons left on his deal and started all 38 games in the Premier League last year.