Jasper Cillessen has been the second choice goalkeeper at Barcelona, behind Marc-André ter Stegen, which is why he wants to leave Camp Nou.

Friday’s edition of Sport now claim the goalkeeper is aiming towards the Premier League where West Ham United ‘love’ him.

Benfica were initially keen on acquiring the 30-year-old’s services, but they were only willing to offer €12m, which did not satisfy the Blaugrana.

Valencia are also interested in the shot-stopper, but they are aware the Dutchman is negotiating with clubs in England.

The Catalan newspaper explains the option of joining the Hammers is on the table.

Manuel Pellegrini’s side are investing heavily in their new sports project for next season and Sport believe Cillessen would fit in very well at the London club. 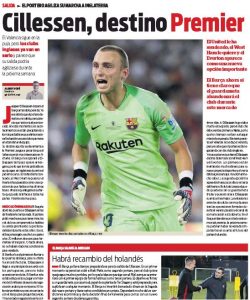 Ernesto Valverde’s side want to reward his professionalism by granting his wish to leave the club in the summer transfer window.

Sport’s report states Barcelona will need an offer in excess of €20m to sanction Cillessen’s transfer. The conditions for his sale have not been met so far.

West Ham interest doesn’t make a great deal of sense, given they already have Łukasz Fabiański, who was one of the better goalkeepers in the Premier League last season.