West Ham United are ‘not giving up’ on the signing of Benfica star Darwin Nunez, according to the latest reports from Portugal.

As Lisbon newspaper Record today explains the scenario the striker has for the summer transfer window, it’s pointed out that the Hammers, who already tried to sign him in January, shall continue to be a potential destination at the end of the season.

The outlet recalls that David Moyes’ side tried to sign Nunez in the winter with a bid worth €50m. Back then, there were two reasons why the transfer did not happen.

The first is because Benfica didn’t think the offer was good enough and turned it down. Then there’s the issue that the attempt ‘did not seduce’ the player, who dreams of moving to a ‘powerful’ club such as Atletico Madrid or Manchester City. 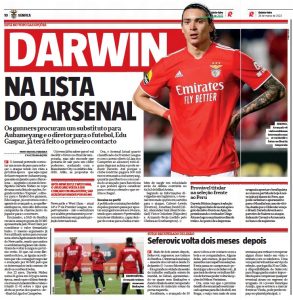 Still, that doesn’t mean West Ham will just walk out of the race. Record writes that the club did not give up on coming back for the signing in the summer.

The Hammers just should be aware of how expansive Darwin is expected to be. Following the 26 goals he scored this season, Benfica are now said to be looking to make €80m with his sale.

And as the striker continues to stand out in the Champions League, the list of competitors for his signing has been only growing.