With Ligue 1 continuing to prove itself as a successful hunting ground for Premier League clubs, it’s no surprise to see the likes of West Ham United and Brighton & Hove Albion turn their attention there for offensive reinforcements.

That the Hammers need a striker is no longer a secret, since David Moyes has yet to be given the Sébastien Haller replacement he’s been after, and Strasbourg’s Habib Diallo could be the answer to his prayers.

The Senegalese striker has found the back of the net 12 times in 30 appearances this season for the Ligue 1 side, and his performances have caught the eye, to the point where West Ham and Brighton are following him. 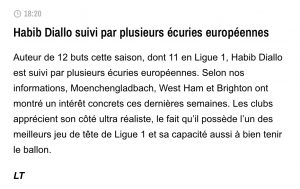 That’s according to RMC Sport, who explain that several European clubs are after him, with Borussia Mönchengladbach, the Hammers and the Seagulls named.

In fact, West Ham and Brighton have ‘shown a concrete interest these past few weeks’, with said clubs appreciating his aerial prowess and ‘ability to keep the ball’.

We’ll have to see if anything comes of this, but it appears Moyes and Graham Potter are after the same type of player this summer, which could make for interesting stories going forward.