They say the Baggies have decided to make an attempt for his signing at the end of the season, but only if they guarantee their promotion to the Premier League.

That’s why the club still have no idea of how much it’d cost to keep the midfielder. They consider it to be ‘premature’ to start the talks now.

Krovinovic was loaned out by Benfica in the summer transfer window, and the deal with West Brom doesn’t include an option to buy. 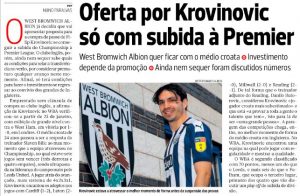 The 24-year-old quickly found a place in the Baggies’ team, and already has 34 appearances for the club this season.

Regardless of Krovinovic’s transfer, West Brom should already spend €10m on another midfielder coming from Portugal in the summer. That’s Matheus Pereira, who arrived from Benfica’s rivals Sporting.