Filip Krovinović’s situation has turned into something of a saga.

Throughout August it was reported West Brom and Benfica were in talks so the player could return to the Baggies, and whilst everyone involved was keen for the transfer to happen, it was the structure of a deal causing problems.

At first, the idea was for Krovinović to return to West Brom on loan, with a €10m buying option.

The disagreement was on how that clause would be triggered, with Benfica wanting it automatic, regardless of what happens this season, and the Premier League club only wanting it to be in place should they avoid relegation.

A few days ago that changed to West Brom offering €3.3m for a loan, and a further €7.8m to make that deal permanent should they stay in the top flight, and Krovinović play more than half of their games. 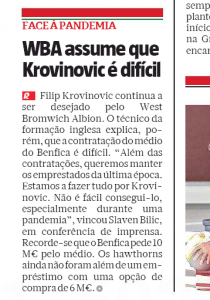 Sunday’s edition of Record somewhat dismisses that, stating West Brom’s offer is for a loan, and a €6m buying option, with Benfica still holding out for €10m.