Home Europe Agent plans to use ‘window of opportunity’ to secure transfer to Manchester...
SHARE

Sunday’s edition of A Bola reports Pini Zahavi is trying to use a ‘window of opportunity’ to secure Alex Telles a transfer to Manchester United.

A Bola explain the Premier League club’s efforts for Sergio Reguilon have hit problems, with the player not convinced he wants a permanent transfer without a buyback. Real Madrid is the club of his dreams, and he’s hesitant to largely give up the chance of playing for them in the medium term.

That has also been reported in Spain in recent days.

This means the idea of signing Telles from FC Porto is gaining strength, according to the report, and Zahavi would be looking to take advantage of the situation.

Such a scenario makes sense, if you were the agent of a left-back seeking a transfer this summer, then going after clubs who want a player in that position is natural. 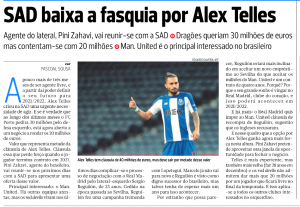 A Bola state Manchester United don’t want to spend more than €20m on Telles, given his age (he turns 28 in December) and that his contract expires in less than a year.

Handily, Porto have dropped their asking price to ‘around €20m’, and Zahavi is expected to present an offer at that figure in the next few days.