There was no way Spurs were ever going to pay the €40m Napoli have been requesting, at least partly because the player has less than a year left on his contract.

As we’ve stated repeatedly, that €40m was looking increasingly realistic, as Juventus moved away from the chase. Sunday’s edition of Gazzetta dello Sport says AS Roma’s latest offer is €15m plus a couple of youth players.

In turn, Napoli have reduced their demands to €25m, plus some kind of bonus.

Clearly, €25m would sound a lot better for Tottenham, but perhaps they want it even lower than that.

Gazzetta state Milik’s entourage have received an offer from Spurs ‘in the last few hours’. The offer relates to wages and would see the forward receive €5m a year, likely after tax. He would sign a pre-contract agreement in January, and then move physically in the next summer market.

Jose Mourinho needs a striker now, so it wouldn’t make a lot of sense for Tottenham to purposely wait, yet there’s another scenario here.

Given Milik would quite fancy a move to the Premier League, and that his relationship has completely broken down with Napoli, there’s a chance Daniel Levy is piling the pressure on to reduce the price for a move this summer. 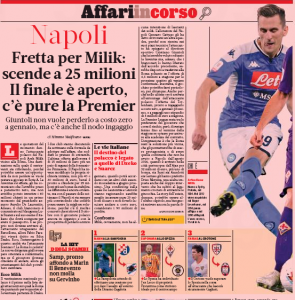 For all the Napoli threats of Milik getting no football if he remains with them, that makes no sense for the Serie A club.

They have a player they don’t want, who doesn’t want to be there, being paid big wages, and all the time running his contract down to free agent status.

Such a plan to put pressure not only seems plausible, but also very Spurs.